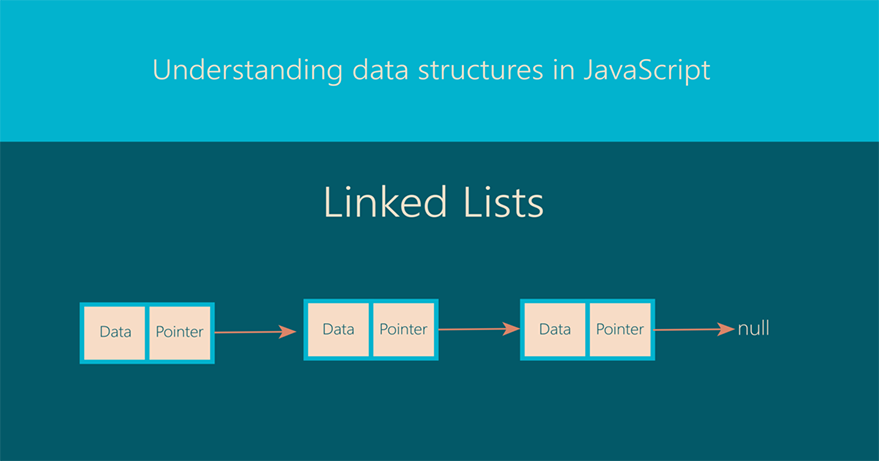 In this article, we will discuss how a linked list gets stored in the database and, we will implement a linked-list from scratch with operations like the addition and deletion of an element, lookups, and reversing a linked-list. Before moving onto implementing a linked-list, one needs to understand what are the advantages of using a linked-list when we already have data structures like arrays and objects present.

We know that elements inside an array get stored in the database with numbered indexes and, in sequential order: 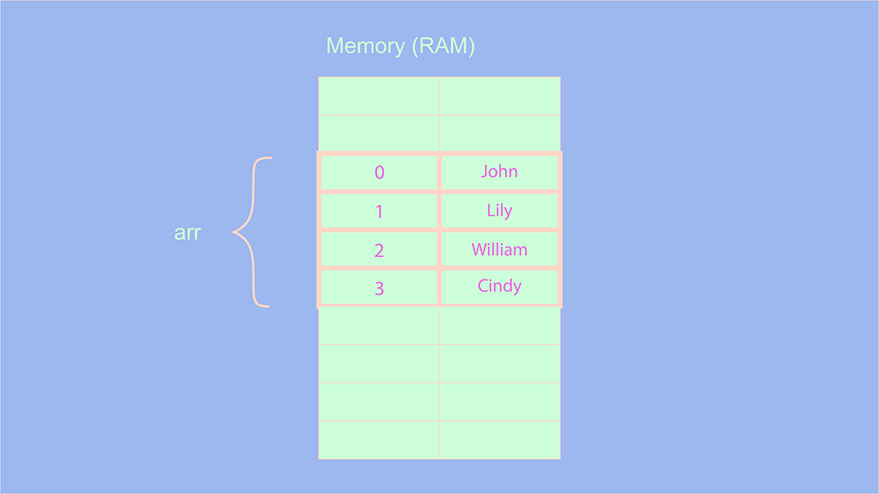 While using arrays, operations like adding/deleting elements at the start or at a specific index can be a slow task since we have to shift indexes of all the other elements. This slowness is caused due to the numbered indexes feature of arrays.

The above problem can get solved with the use of objects. Since in objects, the elements get stored at random positions and therefore, there is no need to shift indexes of elements while performing the operations like adding/deleting elements at the start or specific index: 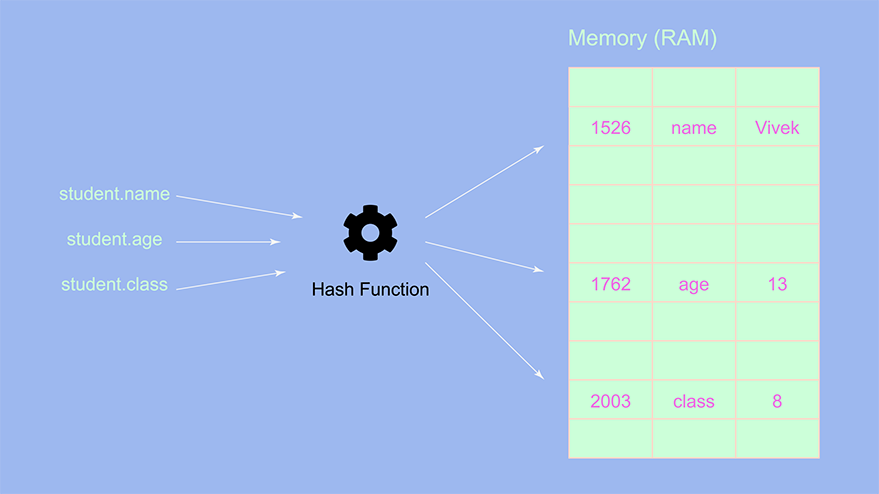 Although operations like addition and deletion are fast in objects, we observe from the above image that, when it comes to iterating operations, objects are not the best choice since elements of an object get stored in random positions. Therefore, iterating operations can take a long time. This is where linked-lists come in.

From the name itself, we can figure out that it’s a list that is linked in some way. So how is it linked and what does the list contain? A linked list consists of nodes that have two properties, data and the pointer. The pointer inside a node points to the next node in the list. The first node inside a linked list is called the head. For understanding better, let’s take a look at the following image that describes a linked list: 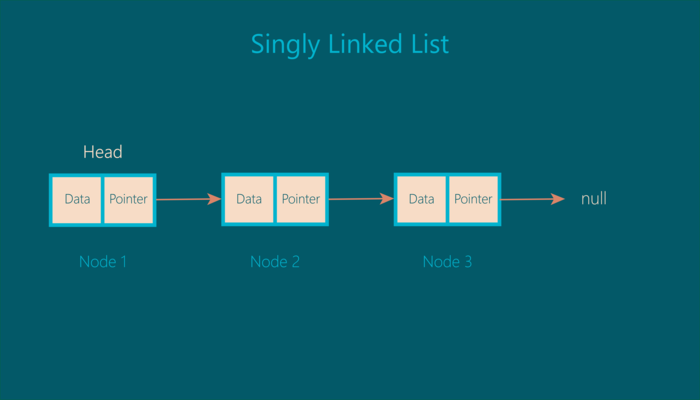 We observe from the above image that each node has two properties, data and a pointer. The pointer points to the next node in the list and, the pointer of the last node points to null. The above image represents a singly linked list.

In the above code, we have created two classes, one for the linked-list itself and the other for creating nodes. Like we discussed, each node will have two properties, a value and a pointer (“next” in the above case). The LinkedList class contains three properties, the head (which is null initially), the tail (which points to null as well) that is used to store the last node of the linked list and the length property that holds the length of the linked list. It also consists of functions that are empty for now. We will fill these functions one by one.

This function adds a node to the end of the linked list. For implementing this function, we need to understand the operation that it’s going to perform: 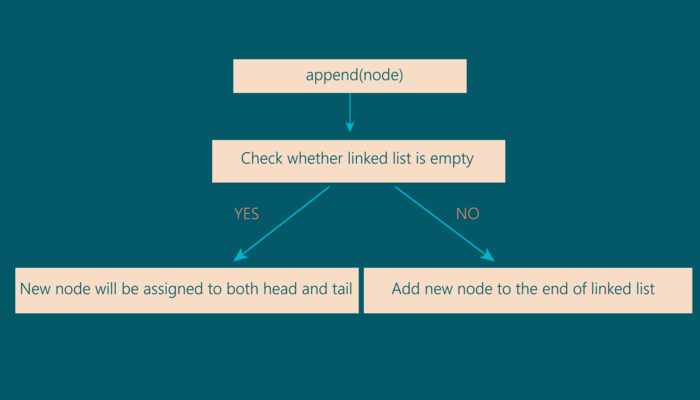 From the above image, we can implement the append function in the following way:

If you are new to JavaScript, understanding the above function can be daunting therefore, let’s breakdown what happens when we perform the append function:

Check whether the head points to null, it does, so we create a new object and assign the new object to both head and tail:

Now, both head and tail are pointing to the same object and this is a very important point to remember.

Next, let’s append two more values to the linked list:

Now, the head does not point to null, so we go into the else condition of append function:

Now, after the executing the above line of code, the this.head.next and this.tail are pointing to the same object and therefore, whenever we append new nodes, the head object will automatically get updated.

After performing three appends, try console.logging the linkedList1 object, this is how it should look:

We observe from all the above code that the append function of a linked list is of complexity O(1) since we neither have to shift indexes nor iterate through the linked list.

Let’s move on to the next function,

prepend (Adding values to the start of the linked list)

Just like the append function, this function as well has the complexity of O(1).

insert(Adding values at a specific index)

Iterate through the linked list till we reach the index-1 position (1st index in this case): 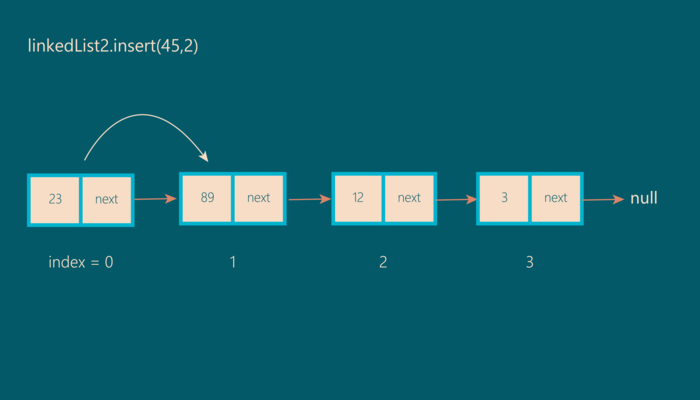 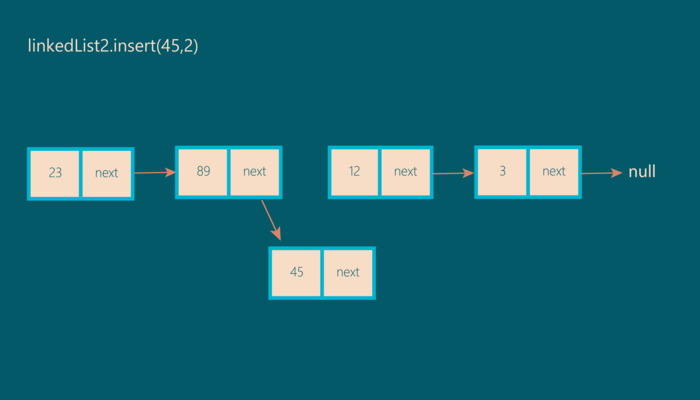 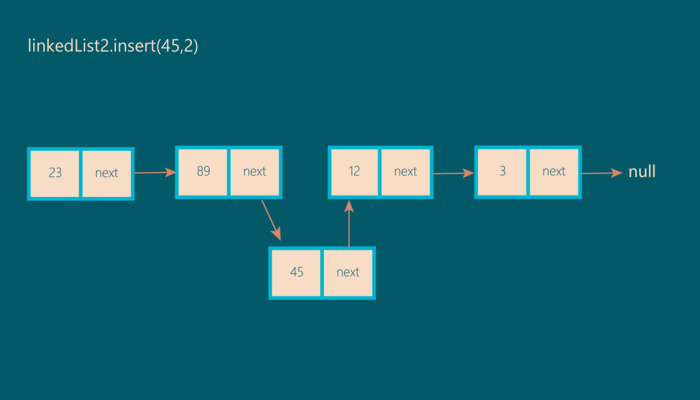 This is how the insert operation is performed. Using the above visualisation, we observe that we need to find nodes at index-1 position and index position so that we can insert the new node between them. Let’s implement this in code:

Let’s decode the function, if the value of index is greater than or equal to the length property, we handover the operation to the append function. For the else condition, we create a new node using Node class, next we observe a new function getPrevNextNodes( ) through which we receive values of prevNode and nextNode. The getPrevNextNodes function gets implemented like this:

The above function basically returns the nodes at index-1 position and index position by iterating through the linked list. After receiving these nodes, we point the next property of the prevNode to the new node and the new node’s next property to the nextNode.

Although it might seem simple, reversing a linked list can often be the most confusing operation to implement and hence, this operation gets asked a lot in coding interviews. Before implementing the function, let’s visualise the strategy that we are going to use to reverse a linked list.

For reversing a linked list, we need to keep track of three nodes, previousNode, currentNode and nextNode. 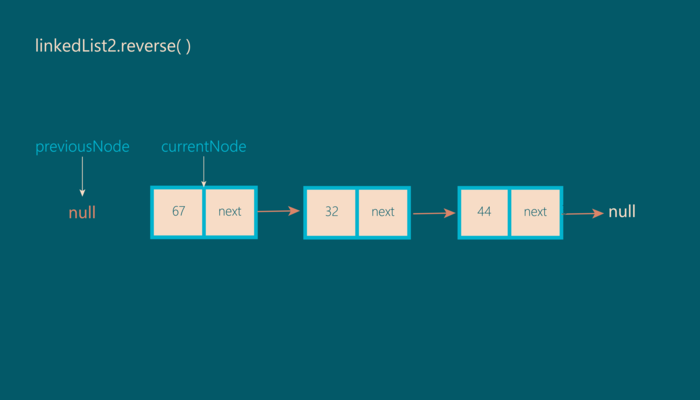 Next, we assign the nextNode to the currentNode.next: 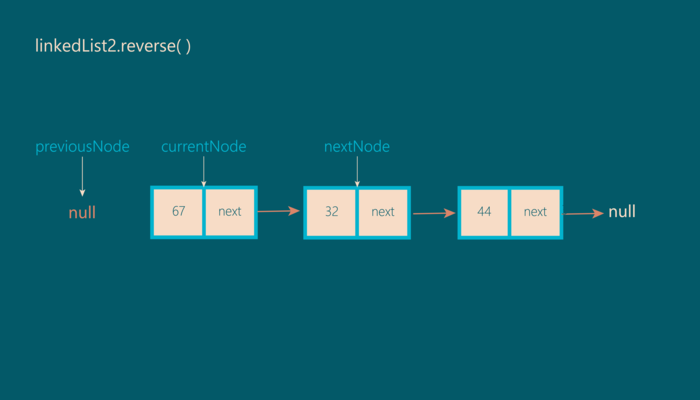 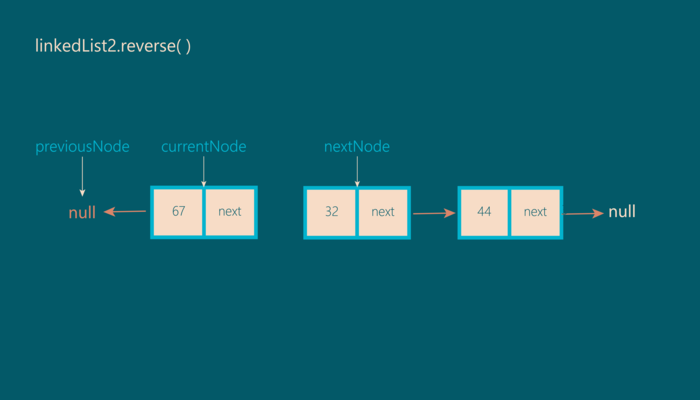 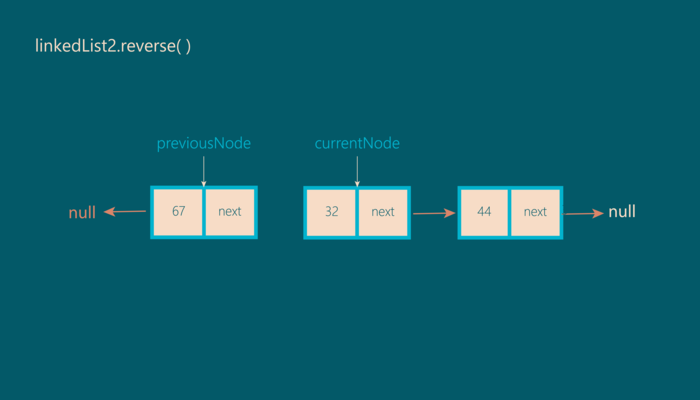 This process restarts from step 2 and continues till currentNode equals null.

To implement this on code:

Like we visualised, till we hit the currentNode === null mark, we keep iterating and shifting the values. In the end, we assign the previousNode value to the head.

The reverse operation has a complexity of O(n).

lookup (Looking up a value at specific index)

This operation is simple, we just iterate through the linked list and return the node at specific index. This operation as well has the complexity of O(n).

From the above operations, let’s conclude linked lists.

Linked lists provide us with fast append(Adding element at the end) and prepend(Adding element at the start) operations. Although the insertion operation in linked lists is of complexity O(n), it is much faster than insertion operation of arrays. The other problem that we face while using arrays is size complexity, when we use dynamic arrays, while adding an element, we have to copy the complete array to a different address space and then add the element whereas, in linked lists, we don’t face such problems.

The problem we face while using objects is the random placement of elements in memory whereas in linked lists, the nodes are connected to each other with pointers that provide us some order.

So finally, we have finished understanding and evaluating a commonly used data structure called, a Linked List. 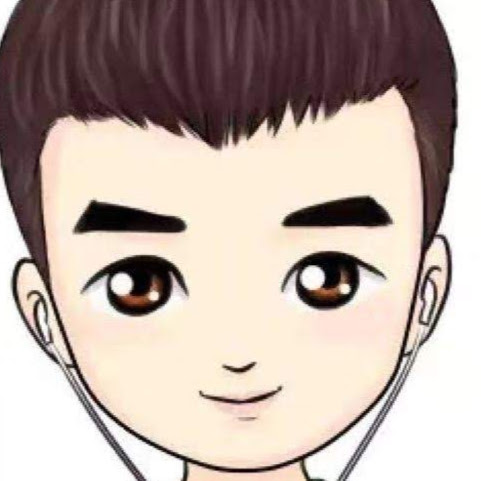 Hello, may I translate your article into Chinese?I would like to share it with more developers in China. I will give the original author and original source.