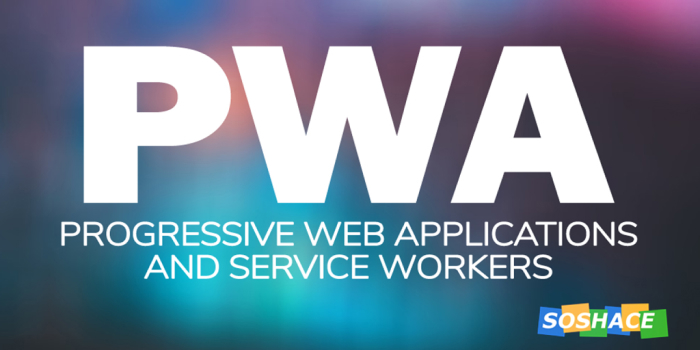 The term Progressive Web Apps was first coined by Frances Berriman and Alex Russell in 2015, as a way of describing applications that take advantage of new features supported by modern browsers, including service workers and web app manifests, and also let users upgrade web apps to progressive web applications regardless of their native operating system. (Source: blog.pusher.com)

Requirements of a PWA

– HTTPS
Hypertext Transfer Protocol Secure is required because of security. This makes it impossible for intruders to disrupt or alter communications between the websites and user’s browsers

– Installable
PWAs are installable. These are different from page shortcuts. When installed, such applications can be shared with another user.

– Network Independent
Offline experience, which is aided by service workers.

– Responsive
PWAs must be responsive. You would never see a native application that would behave like a desktop-view website causing the user to swipe left and right to see the contents.

– Placed on the home screen (Installation)
These kinds of applications are very similar to native applications such that they can be installed on a device and placed on a screen.

– Faster webpage load time.
Since pages are cached, the user has a faster experience with the site except for cases where a new resource would be fetched.

Setting up a PWA

This aids in offline experience. More on this topic later.

This controls what the user sees when launching the application after installation. This includes splash screens, themes and so on. It is saved as manifest.json.

Remember to add your manifest file in the head tag of your HTML document.

Service workers are scripts written in Javascript which manages caching and responding to resource requests. This helps in reducing the dependence on the network as cached contents would be loaded until a new resource is acquired.
They have access to Cache API (the interface that provides a storage mechanism for Request / Response object pairs that are cached) and Fetch API (interface for fetching resources) which helps in storing data for offline access.

They also support Background Sync which postpones actions or requests sent by a user until there is stable network connectivity. This ensures that whatever the user wants to send is actually sent.

How they apply to PWA

As seen above, service workers help in offline experience. In most native applications (including those which require an internet connection for some operations), users could still perform some other activities without network. Popular native applications with this enabled are twitter, facebook, Whatsapp. Though you cannot post a tweet, follow a facebook friend or add a user to a WhatsApp group without a network connection, but the applications are still accessible.

The same goes for Progressive Web Applications. When you have been able to enable one on your previous Web application, you’d need a service worker to improve the offline experience.

The maximum scope of a service worker is the folder level at which it is located. It cannot be used for any file higher than the level it is placed. For example, A folder structure such as 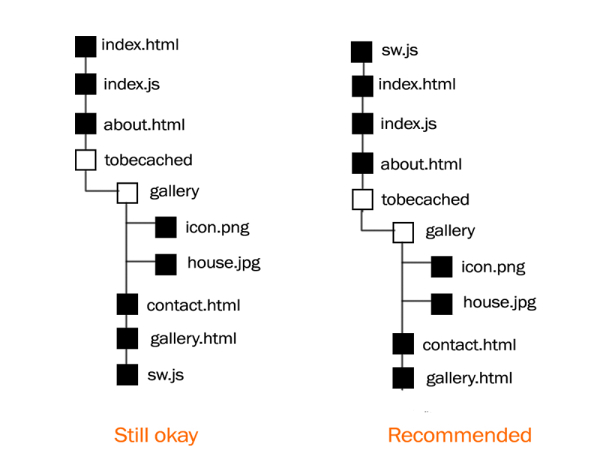 Illustrating the scope of a service worker

In the first illustration,
The service worker cannot be used for index.html and about.html because they are beyond its scope. It can only be used for the contents of the folder, tobecached.

The second illustration is recommended because,
When using a service worker for a web application, it is good practice to use it at the root level so that everything in the application is within its scope. Moreover, this is a requirement for a progressive web application.

Setting up a Service Worker

All work is done in the worker file but the registration is done is a javascript file (index.js in our own case) which would be required in our application.

In the next line of code, the worker is registered which returns a promise. We then handle the successful registration or the failure with .then and .catch respectively.

During installation, the install event is triggered by which we can listen to and execute some codes.

When the service worker is installed, we create a new cache which is called v1 (like version 1). Then, we add all our files to the cache using the addAll() method with the array of files passed as argument. An activate event is also triggered after installation. If no install event is triggered, activate event will not be triggered.

The activate event is used to do things that would have broken the previous cache version while it was running. Here, we can remove old cached files or versions that are no longer needed to free storage.

Next, we can use the fetch event to tell service workers to do something with the cached resources when a resource controlled by the service worker is requested.

You can go through the same installation process above but with a new version, say, v2.

By listening to the activate event, we are able to delete versions which do not appear in the list of versions we want to keep.

Read more about service workers in the MDN Documentation.

With the above steps applied correctly, you have created your progressive web application. The next time you (or anyone) opens your website, an ‘Add to Home Screen’ prompt is opened. If the action is accepted, the website is installed on the device. The worker caches all pre-defined resources (filesArr in the example above) as soon as they are loaded. To test it, you could disconnect from the network and try opening the following links: ‘/’ or ‘./tobecached/contact.html’. You’d discover that they opened without network.

You can know the service workers registered on your browser by entering chrome://serviceworker-internals/ in chrome and about:debugging#/runtime/this-firefox in firefox.

You can also check if the features of your PWA are in order by analysing the application with Chrome Lighthouse.

If you aren’t using one already, I guess you have seen the reasons why you should. Users tend to use native applications compared to websites because they remain accessible with or without a network connection. Do not limit the potentials of your web applications.
Thanks for reading : )

However, I also read that Safari now enables PWAs. Check out this article https://www.google.com/url?sa=t&source=web&rct=j&url=https://medium.com/awebdeveloper/progressive-web-apps-pwas-are-coming-to-a-safari-near-you-216812aba5a&ved=2ahUKEwjj2eitob3mAhXxN-wKHVUEBE0QjjgwBHoECAMQAQ&usg=AOvVaw0KPG2majoJpOg1325yoa23&cshid=1576605762302

Kindly ask more questions if you have any.

Neither do they support WebRTC in PWAs. 🙁
This unfortunately often renders the whole idea useless. For example xroom.app supports PWA mode but thanks to Safari that mode makes no sense on iOS at all.