Kseniya is a front-end developer and she really loves her job. She works a lot and it never gets her bored. She writes clean and understandable code. She quickly finds original solutions for challenging tasks and this is what fascinates her the most. Kseniya is in awe of working with beautiful designs, developing new components, and solving exciting challenges.

I’m a frontend developer at potok.io. I do a lot of good things in there. For example:

- Doing a lot of refactoring;

- Reviewing the code of other developers;

- Writing documentation for the features that were designed and implemented by me.

- System tour. The feature allows new users to learn how the application works, it takes a tour of different parts of the system and shows how to perform basic actions.

- Calculating the values ​​of form fields. We implemented a form constructor. Now the form components are not stored in the code, their representation is stored in the database, but created using the constructor. I have developed a formula editor that allows you to define formulas for calculating fields as strings.

- Parsing resume from job sites. We have a browser extension with which you can add a candidate from another job site. It has the user-friendly interface, formula editor, documentation, the ability to check yourself before saving changes.

- Demands map. Search for the demands for candidates on an interactive map with search and filtering capabilities by different criteria.

- Table - Form. A table with editable cells, which uses various form components, as well as error highlighting and various conveniences, such as working with keyboard shortcuts.

- Scripts to generate a theme according to variables in Figma. 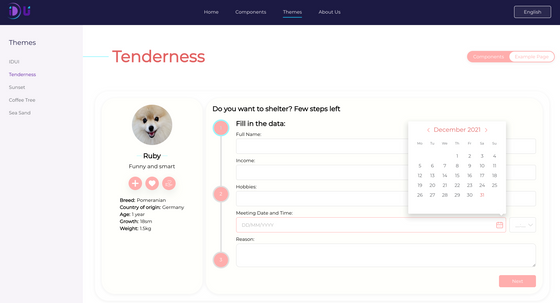 Here I am the project creator, idea owner and code developer. This is a library of components with easy customization options. We have great documentation and a storybook playground for each component. The library components can be used separately, but you can also base your project on the library. In the last case, customize the components using a theme. You can use a ready-made solution, create, own or contact us for help.

I developed a lot of universal components, such as Popover, Modal, Date/Time pickers, Tree, Collapse, etc. Also, I developed a website where all the components and themes are shown.

Here I was a fullstack developer, mainly involved in porting a project from a monolithic architecture to a microservice one. Also, I took part in the development of the project admin panel. I developed several bots for Telegram and VK.

VK bot for dating and admin panel for bot management. I designed and developed the bot from scratch and brought it to production.

Here I was the main fullstack developer. I developed this project from scratch. It allows you to analyze the success of cappers using graphs, set your own formulas for analytics, set your own coefficients, send the results of automatic calculations to Telegram to immediately notify the user about changes.

I designed the architecture of the project, created a good interface and algorithms for the analysis of cappers based on custom formulas. I’ve created data parsers, implemented automatic calculations.

Here I was the main frontend developer. I developed this project from scratch. It is a task manager with extra features. I thought over the architecture of the project, turned the design into code and brought it to a finished state.

Here I was the main frontend developer. I completely refactored the project with dirty code and implemented task manager feature.

Here I was a fullstack developer. Developed a feature for calculating the parameters of transport facilities for the transportation of goods. Created an admin panel using Voyager.